The JB trip was okay. It’s just like shopping in Singapore—only in Malaysia instead. The waiting, the bargaining… You get the idea. I’m never much of a shopper. I’m more into impulse buying

I’m going to try to get a cable so I can transfer pictures from my E398 to the computer. I seriously think spending SG$5 on MMS to my email is extremely pointless :mrgreen:

Last night, my family on my paternal side had our reunion dinner. I always look forward to it because that means catching up with my cousins. I only see them once a year as I don’t even see them on Chinese New Year itself!

If you remember my entry for last year’s reunion dinner, my 12-year-old cousin Natalie, was very much into this card game called Dai Dee. Well, apparently, she still loves this game. So we spent our time playing that before, during, and after the dinner. Really, this girl does not know the limits :mrgreen:

Kids these days are so lucky. They get cellphones at such a young age. So we spent a number of time checking out each others’ cellphones and snapping funny pictures with the camera-enabled ones.

Two pictures (from my E398) to remember the occasion: 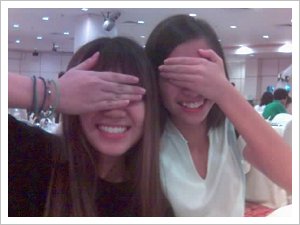 Me and my cousin Natalie 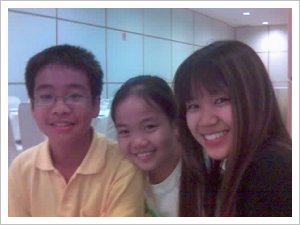 With my cousins, Wei Hao and Rolynn

Hmm. My family and I are on our way to Johor Bahru, Malaysia, to go shopping. The first time, I should say. I wonder what’s the special occasion—besides the fact that the Lunar New Year is around the corner.

Look at my joy: 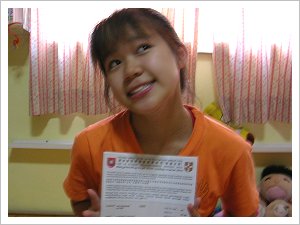 Shall We Dance? was a movie that he thought would turn out crappy since JLo was inside. I honestly admit, I’d thought so too.

But the dancing got the better of me and so, we watched that. I don’t like to admit it, but I like dancing. However, I love admitting the fact that I can’t dance :oops: So there.

Anyway, don’t watch the movie because of JLo. I don’t think she’d like that. After all, her character would not like any guy to join ballroom dancing because of her. She said so herself. Heh

Well, I loved the movie. He loved it too So why are you still reading this? Go secure a seat now!

Elektra was a different story. I’m not much of a Dare Devil follower but I think Elektra’s cool. I did not watch Dare Devil only because Ben Affleck starred in it. I so do not like that guy.

I was told by many people that Elektra had no plot and that the only reason why it’s still selling is because of Jennifer Garner. Well, I beg to differ.

Ever since I watched 13 Going On 30, Jennifer has always been Jenna to me. So seeing Elektra was like seeing a dead serious Jenna on a mission. I’m sorry, but it’s hard to change my image of one person at times.

Then again, I watched Elektra only because of action. I like action. But not like those huge explosive demolition-of-buildings-every-five-minutes kind. I like comic-hero kind of actions. Heroes like Spiderman. Or Batman. Not Dare Devil. Puh-leeze :mrgreen:

Well, the kid who plays Abby Miller, Kirsten Prout is rather cute-looking. For a teenage girl. Not that I’m les or anything, if you know what I mean.

Two movies in a day. Yeah, I had a great time, thanks for asking.

Hallelujah! Finally! After two long weeks of killing snails, squishing green droplets, chiong-ing* pigs, whacking mushrooms and hacking tree trunks, I have finally moved up to level 25 on my warrior, Lexiena. Check out my new and blue outfit.

If you’re wondering what I’m talking about, welcome to the world of Maply Story. I’m not sure what kind of online game it is but I was told by Jun Wei that it’s a MPORPG (multi-player online role playing game).

It’s rather addictive, I must say. It’s a joy to kill all those snails/squishies/mushrooms/tree trunks/pigs No, I’m not stressed. Neither am I sick so kindly stop feeling my forehead!

But I’m not that evil, really. Check out what Jun Wei’s magician Aeldureth was doing when someone else died :mrgreen: 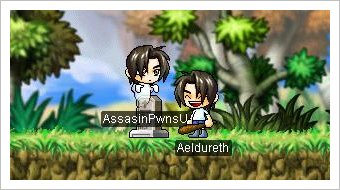 And I still can’t. Older not in the sense of being older than me but, that you guys are a year older. Yes! And one of you is actually an adult by now.

The ability to vote! The privilege of watching (ahem) R-rated movies (not that I want to, really).

Not to forget someone else:
Happy 17th Birthday Joel didi! I know you hardly read my blog but, whatever. It’s nice to greet you here nevertheless

Hope you guys had a nice birthday Be it at the examination room or workplace, you know what I mean

Oh, I must not forget to start making the birthday cards…