I met up with Jolene last night (initially, for dinner. But we both were not hungry) because someone could not make it :? We went to Suntec City and started window shopping. Wait, why did we go there for? Oh, yeah. She wanted to check out the men’s shirts at Topman.

According to her, she says that Topman shirts usually caters for metrosexuals or gays. So the smallest size should fit us (since we have problems wearing ladies’ cut :neutral:) She started going through rack after rack before choosing some shirts to try on. I spotted this really nice looking collar-tee and tried it on.

Since we can’t take pictures in the store, I did it secretly with her N70 cellphone 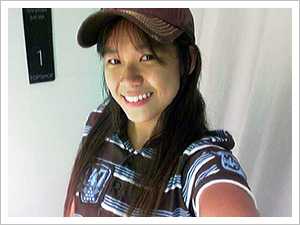 Trying on the collar-tee and a cap 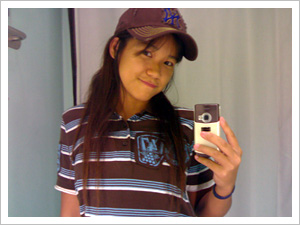 
Then I tried on the shirt Jolene took and I kind of like it. But it was way too big for me as it was a size S. 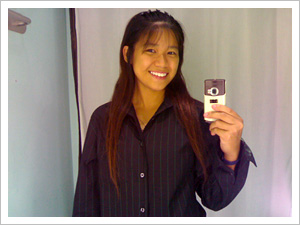 Anyway, today’s Desmond’s 20th birthday! And Lilin invited Jolene and me to dinner with them.

Well, the initial plan was to meet Jolene at Plaza Singapura for Carl’s Jr. breakfast plus a study session but as she was tired, she told me to meet around lunch time.

Well, I woke up around half-past ten and could not finish my assignment in time to meet her. So we pushed the meeting time to 3 in the afternoon. Well, 2.45 p.m. came and we were still online as I was rushing to print my tutorials with a retarded printer. So we pushed it to 3.15 p.m.

I left home at about 3.45 p.m. to find out that there was a train disruption so I was running even later. What was worse was that there was this lady who was slightly crazy in the same carriage as me so she was walking up and down and shouting in Hokkien to no one in particular. There were a few moments where she was right beside or right behind me and honestly, I would not know how to react if she suddenly grabbed me and shouted in my face :?

Seems like it’s a day to meet strange, weird or crazy people because there was this hardcore nose digger sitting a few tables away from us. And the next thing we knew, he moved his location and was just a couple of tables away! Jolene said that he must be checking me out :mrgreen: And then we started talking and when something funny happened and I started laughing out loud (literally), that nose digger laughed out too! How freaky is that?

We could not stand his constant gaze at us. And before we left, we were told that he ate his boogus. EWE! :roll:

We left for Long John Silver’s hoping that he would not follow us. There we shared a Combo #1 because we were both not hungry but craving for fries She studied with her iPod for company while I studied… alone Eventually, I fell asleep

Finally, we met Lilin and the birthday boy at Secret Recipe. Jolene and I shared a kid’s meal (I kid you not. They actually let us order a kid’s meal!) which consisted of four mini burgers with alphabet fries. I felt like I was 6 again 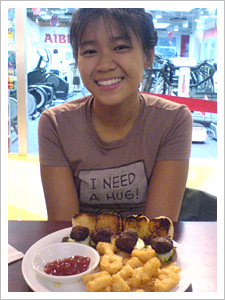 During dessert, as it was Desmond’s 20th, Jolene wanted him to do 20 poses. I thought he was quite sporting until he stopped at 5 :mrgreen: 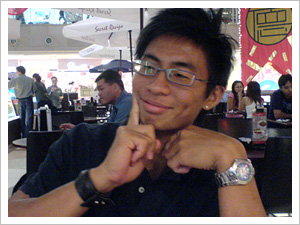 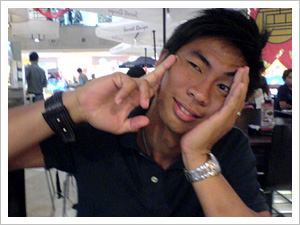 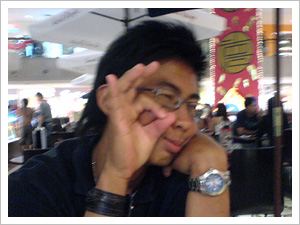 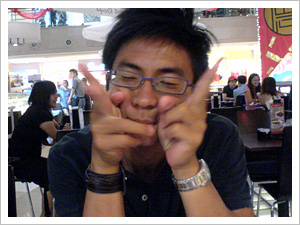 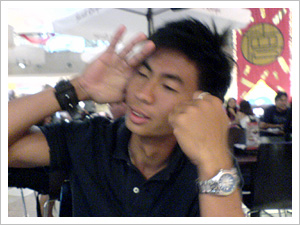 I think he’ll kill me if he sees that I’ve publicized these images But, really, he should be glad that he has got three girls to celebrate his birthday with him 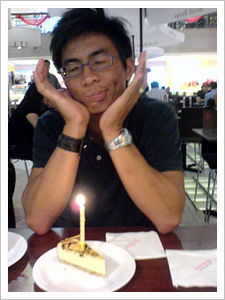 Pose #10 with cake and candle

After dinner, we bid the couple goodbye before window shopping again (we had to get Desmond a belated present) and we ended up looking at men’s singlets. We saw these awesome looking ones and we noticed that they were on sale and tried them on. It fit quite ok as we did not want it to be too tight but, ohmygoodness, the arm holes were just too huge.

And I think the gods of mistake must be laughing at us because after trying them on, we found out that those singlets were new arrivals that cost SG$29 instead of SG$15 like we saw on the sign :mrgreen: The salesguy said that they had misplaced those singlets. PHOOEY!