I know I am like, very slow. But I just finished the first season of Veronica Mars (in which I have heard about it quite a lot a long time ago but just never had the sources then) and I must say that it really rocks. The only problem I have with this show is the theme song (“We Used To Be Friends” by The Dandy Warhols). I just (personally) feel that the melody is a tad too cheery for the series.

Before watching or reading up on this show, I knew I had this thing for Logan Echolls. Described as Neptune High’s “obligatory psychotic jackass” by Veronica, he is quite a bad boy. But, whatever. Jason Dohring is my so-new poster-guy now 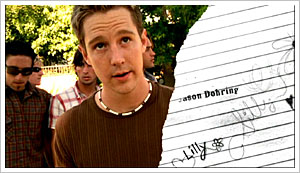 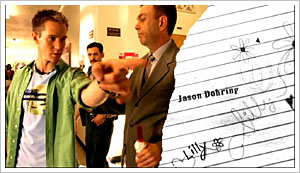 I so dig him

So my team went to Sentosa on Saturday to do some relaxing and bonding instead of the usual training. I would not say it was a big success but at least the team talk we had cleared some stuff hanging and tied some loose ends.

Today was Sky Tower & Power98 Carvivor Rally and I had to be up by 5.30 in the morning in order to reach SAFRA Yishun Country Club at 7 to register. My group had Aaron , Xiong and Neo and they can be very, very, very lame (and a tad childish) together.

Oh, and we had a group name, too. When I first saw our name, I literally laughed out loud. Our name was 3 wolves and a not so little sheep

Carvivor had shortlisted groups so there were 150 groups (of four) trying to win SG$10,000 in cash. I kid you not. Hey, $2.5k is quite handy in my pocket This year’s theme was water so we were told to be prepared to get wet.

Anyway, the challenge kicked off with one person from each team swimming the breadth of the swimming pool to collect the location of the first station. There were five stations in all and our first stop was at West Coast Park, followed by Pasir Ris Park, Sky Tower at Sentosa, some car show room around Ang Mo Kio (I forgot the location) and Choa Chu Kang stadium.

At each station, there were challenges that had water involved. The time taken for all the challenges are tabulated for each group and the group that completes all five challenges in the shortest time wins that $10,000. And, unfortunately, 3 wolves and a not so little sheep did not win

But I had fun, I guess. I met Zhi Yuan at the challenge! It’s been a long time since I last saw him. We agreed that we should meet up soon to celebrate our belated birthdays

So, no holidays for the tertiary kids. But, shorter schooling hours are good Jolene and I planned this shopping trip since last Tuesday since we were feeling down and needed a day to relieve everything. Boy, it sure worked wonders.

We met up at City Hall to check out some skinny jeans at Peninsula Plaza since they were around SG$20. However, we did not fancy the material much (although the colours were really striking).

So we took a train to Somerset and hung out at Flash and Splash at The Heeren for almost an hour or so trying out various Emily Strange clothes. She ended up getting a skirt while I got two Emily Strange tops and a watch because they were going at half price

We walked to Lido, hoping to catch a movie. However, the timings did not fit into our schedule so we just grabbed Subway cookies instead (since she was craving for some peanut cookies :D). We headed to DFS Galleria in hope to look at the alcohol section again (I can hear Jason calling us jiu gui) but they only had whiskey on display

So we crossed over to Far East Plaza as she needed a new belt. Wei Zheng joined us there and I bet he regretted it since we took quite some time looking at belts and bracelets

After he left for work, Jo and I wandered around till I decided to head down to Parkway Parade to get my left ear pierced yet again

After getting my fourth ear hole, I checked out Esprit and walked out SG$50 poorer but with three nice t-shirts

Retail therapy is so great with you, sister!