This was from The Simple Woman’s Daybook in which I found via here.

Outside my Window: It’s past midnight where the sky is dark and the air is cool after an afternoon of rain.

I am Thinking: I should clear some space on the bed so I can actually sleep in it later…

I am Thankful For: Guan who will be home most of the time till the beginning of December

From the Kitchen: A loaf of Gardenia wholemeal bread

I am Learning: More about Zayden Asher each day

I am Wearing: Canoe Polo Opens Championship 2008 tee and shorts.

I am Creating: A couple of birthday cards.

I am Going: To brush my teeth before hitting the sack. Or maybe eat some wholemeal bread before that

I am Reading: Fullmetal Alchemist volumes 20 and 21. (The series is finally ending *sad*)

I am Hoping: That I can actually accomplish something later today.

I am Hearing: The MIL doing the laundry.

Around the House: Two words—very messy :?

One of my Favourite Things: My (growing) collection of journaling cards

A Few Plans for Next Week: Spending more time with Guan and Zayden and making a few layouts. 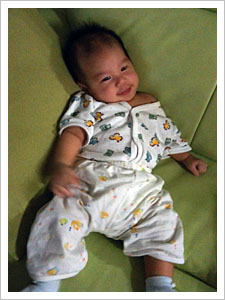 Zayden is communicating and responding even more compared to two weeks ago when he started cooing back when we talked to him. And, yesterday, he fell asleep on his own when we put him down for a nap. Yes, there were some attention crying every now and then. But after a while, he was finally quiet and still and fast asleep! Guan and I felt so proud of him …

… till he woke up crying around half an hour later. Nah, we’re still proud of him