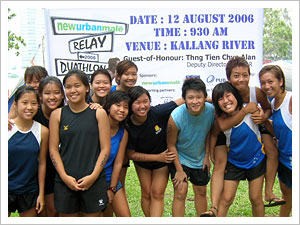 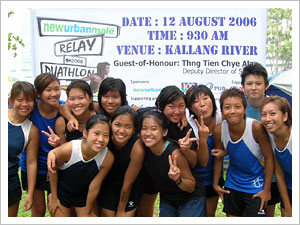 My body is aching oh so badly.

After missing a couple of trainings (due to my poor health and lack of trainings for juniors), I feel like my body have gone all woozy and weak, unable to run, losing breath, feeling like collapsing and all that.

Yesterday, after gym, Wei Jun went all out by making us do rounds of sprinting 100m, jogging 100m and 15 push ups. The final round had us struggling to do 140 push ups. (We had to restart at 40 no thanks to some guy.)

After going home, I collapsed and slept till four this afternoon. Gosh, I feel so tired now.

It came as a surprise, and surprise me they did. My canoe junior girls along with Jun Yu gave me a mini pre-celebration for my 21st birthday yesterday along with a lovely chocolate cake.

They were surprised that I did not find out about their plans. I blame it on my blur-ness and slowness. Also, the lack of anticipating anything.

The blue Adidas shoe bag is lovely! Thank you my girls, and yes, I love you too! 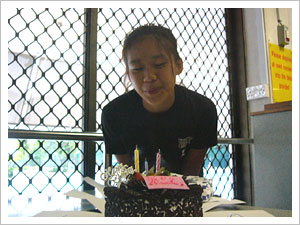 Blowing out the candles

It has been a solid month of training and I am proud to say that I have only missed one session due to health reasons (menses and a swollen eye are party-poopers).

Because I missed a Saturday training, I had only two water trainings so far. Yet, I feel accomplished being able to do all the four rolls (namely, wall roll, paddle roll, hand roll and ball roll).

A wall roll is simply using the edge of the pool to support and push oneself up when capsized. A paddle roll would be using the paddle to sweep oneself up. A hand roll is similar but without the aide of a paddle. Finally, a ball roll is a hand roll but with one arm holding the polo ball.

I feel kind of bad being able to do the rolls while some of my team girls are still struggling with a wall roll. And even though they jokingly tell me that they’re jealous, I’m not sure if they really are after all…

We’ve been doing land trainings most of the time since water training was nothing much last Saturday. So everyone was excited when we were finally going to start the polo session this Saturday.

I have been waiting all week for today. And no thanks to my best friend, I am unable to go into the water

Sometimes I hate being a girl.

Edit: Dangit. I woke up this morning with a swollen eye. Thankyouverymuchgodsofswolleneyes.

Well, my first day of school was pretty normal I guess. Lessons have been going on and about. It’s been two weeks but I don’t want to be left behind so I’ve been attempting to revise everyday. My plan was to study every weekend but the past two weekends have been eaten up by camps. So I’m making use of today which is Labour Day

Canoe camp was fun. Fun in the sense that the canoeing parts were fun. I remember attending the same camp four years ago. However, both camps were rather different.

This camp was too big compared to last time’s so I could not bond with anyone closely. At the other camp, it was smaller-scaled and even though there were less than 30 campers, we bonded well together and even till now, four years later, we are still in contact with each other

Sigh, lovely memories back then.

Anyway, I am totally sunburnt because of the canoeing at Kallang as well as the trying of canoe polo back in the school’s swimming pool. Because of my spoilt skin condition, I was the only one who got this burnt :neutral:

I am such an idiot when I was rowing the canoe for canoe polo. I forgot that the paddling strokes were different from a normal canoe so I could not paddle straight. And I was the first one to capsize not once but twice :roll:

It wasn’t until I remembered that I had to paddle lightly, then did I get the hang of it. But before I could continue paddling, it was time to switch for the other groups to have a go with the canoes :mrgreen:

My skin’s much better now. Not so painful. My muscles doesn’t hurt as much either. But I guess it’ll hurt once I go for Tuesday’s gym training Do wish me the best of luck because I really need it