yes, pwen did this topic in her blog a few entries ago and somehow, it got me thinking about it again. it’s rather depressing to know that after living in this world for 18 years and 6 months (yes. that’s how old I am today) I don’t have a single reciprocated (sp?!) love back.

I don’t know. I mean, sure, there are others.. sis, boss, pwen.. cj?? haha. yeah. but it still sucks all the same. I’ve got my kor who’s a real buaya-er (flirt) and he can get a gf this year. met her at camp too *hngh* and another church pal of mine who got attached.

only thing is that the latter wasn’t that lucky. I admit, he’s abit of a fool. I mean, he met this girl online and he’s never even met her before when they went together. I mean, it’s quite dumb. to get a gf and you’ve never met her before. but that’s what he did. and he found out that everything was a lie.

the pic she sent him wasn’t even her. the life she told him about wasn’t even true. she said she’s in aussie now but she’s still right here in singapore. it’s so dumb. but I pity him. his first relationship and it has to turn out like this.

and I read in some girl’s blog about she and her new guy. they broke up. apparently, she found out that the guy made a bet with his friends to see who could ‘get’ her first. how sad. to think that these only happen in the movies.

so at times, I guess I’m glad I’m single. and like I’ve said before, I am happy being single. I’m just unhappy being single and being in love at the same time. especially when that love isn’t reciprocal..

enough of heartsick stuff. I’m sick of it -scolds self- now, to end off with a happy note, here’s two of the many snaps we took that eventful night with the neoprint machine -grins- 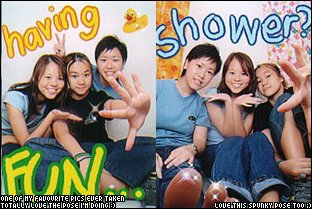