A rather belated post but I decided to take my time

I had no idea what the programme was going to be as Jun Wei would be planning everything. He just told me to “meet at 1030 at Plaza Singapura“.

We had MacDonald’s for brunch. There, I gave him his anniversary gift. Cost me quite a bomb but it was definitely worth it

After that, we walked to Cathay Cineleisure because the next plan was to go bowling. Little did we know that the alley was closed for a gaming/entertainment centre :neutral: We had to walk back because he got us tickets to Cars at the new Cathay House 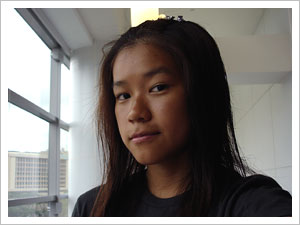 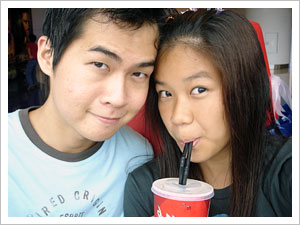 
The movie was great! Pixar did a swell of a job as usual

The next part, he said, would be a secret place because we were going to get my birthday present. He even planned to blindfold me with a super unglam purple blindfold. I was so stunned I had to protest because no way was I ever going to put that on.

The weather got a little dreadry and we took a cab down to Suntec City (Hmm… my gears are starting to work.) After alighting, we walk towards the fountaint and after passing the chocolate store, he told me that I had to close my eyes.

Did he trust me? Nooooo. He still had to have his hand over my hands (which were over my eyes). I was instructed to stay aside after walking blindly for a few minutes. He then told me to open my hands and…

… he placed a baby hamster into my opened palms!

I could have two! And they were only two weeks old. Small little cuties! (I’m sorry but I simply start gushing over hamsters.) We picked their food, bedding, toys etc but we were not bringing them home that day

We had a snack of gelato ice cream when I felt rather spastic. 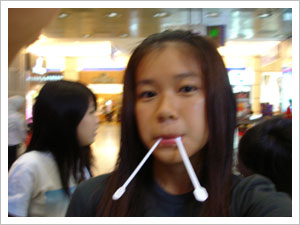 We took a bus to Bugis where we had dinner at Swenson’s. 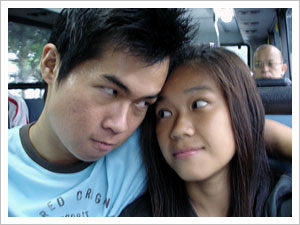 It was interesting that he planned it in such a way that it was like his birthday. On his day, we had brunch at Plaza Singapura MacDonald’s and dinner at Bugis Swenson’s.

Of course, I had to claim my free ice cream 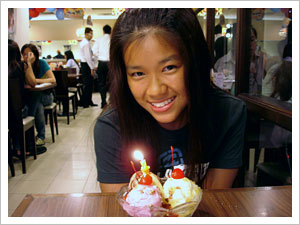 Happy Birthday to Me!

After dinner, another surprise. We took the DHL balloon into the sky. It was cool! It was fun! And I love heights so it was thrilling

We took a bus back to his place and I took a nap before hitting Ministry of Sound, our final stop. By the time we actually reached MoS, it was close to 1 in the morning. We just clubbed for a couple of hours before going home.

And yeah, I had fun