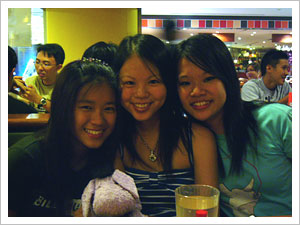 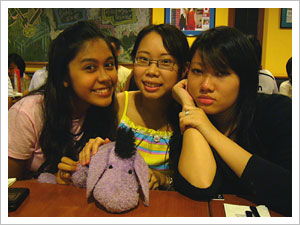 My body is aching oh so badly.

After missing a couple of trainings (due to my poor health and lack of trainings for juniors), I feel like my body have gone all woozy and weak, unable to run, losing breath, feeling like collapsing and all that.

Yesterday, after gym, Wei Jun went all out by making us do rounds of sprinting 100m, jogging 100m and 15 push ups. The final round had us struggling to do 140 push ups. (We had to restart at 40 no thanks to some guy.)

After going home, I collapsed and slept till four this afternoon. Gosh, I feel so tired now.

Which totally fits my week. It’s been a series of good-bye days because Jun Wei has left for Australia early yesterday morning.

My whole family turned up to send him off at the airport. So between my family, his family, his relatives and his friends, it was really hard to have an intimate/private goodbye. (Hey! I am a shy person.) 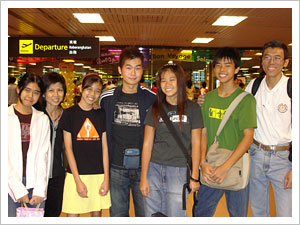 My family, Jun Wei and I 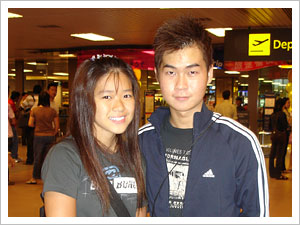 Getting fever is pretty okay. Really. It’s a matter of how high the fever goes. So let’s say one gets a temperature of 37.7 degrees celcius. It’s still rather ok. You won’t die or get sent to the hospital. The most you just take some medication and the fever subsides.

The thing about me is that I’m allergic to the fever medication. Any dosage would result in swollen eyes and rashes for the next couple of days.

So when I was down with fever on Friday afternoon, I went over to Jun Wei‘s place to rest. But by evening, my fever rose to a good 39.1 degrees celcius. Unlike 37.7, 39.1 is really high. I could get sent to the hospital (yuck). So he started sponging me, trying to bring down the temperature.

He ended up calling Mother who told him to give me half a tablet of paracetamol (which is a fever medication that I’m allergic to). I told him I could not take it. But he said my mom told him to give it to me. Knowing I was going to suffer for the next three days, I took it.

When Aunty (Jun Wei’s mother) came in later, she found out that my eyes had indeed swelled. I had no idea since I was trying to sleep. So when she told me my eyes were swollen, my first thought was, “Ohmygosh, I must look like crap now.”

Then the rest was a hurry of calling my parents, arranging to see the doctor, drowning a quick dinner and grabbing a cab to the clinic.

Gah. I can’t believe I am so weak.