I love Absolut Vodka And the SPCT chalet from Wednesday to Friday sure provided me with Raspberri and Vanilla The thing is that I kinda mixed it with ice cream soda not to mention having Chivas with jasmine tea, I got a little too tipsy :neutral: I got better in the end but not after vomiting, suffering chills and a splitting headache. Meeh. I wonder how everyone could put up with me :?

Dancing with Joan in the chalet was pretty fun But I hope Mervin won’t go around showing everyone the video he took. It’s really embarrassing :oops: I guess that’s where I first heard “Maneater” and “SexyBack” from Lex’s cellphone. Now these two songs are on my playlist.

Friday night was an overnight date with the 7ners plus boyfriends at Albert Court Hotel. It was quite a reunion as Pei Wen and Jun Wei were back from Australia (and since Up swore he would not go for another 7ners gathering till Jun Wei was back, he’s definitely glad the latter’s back) not to mention we have Qing Xiang and Zhao Ming joining us. Gosh, labelled new blood by the others 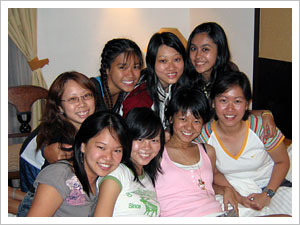 Perrine, chief organizer of the whole event, along with Elisia, CJ and Pwen had made the rest of us play some couple games which were really fun as well as it broke the ice among everyone. As long as there’s Up and alcohol in the same room, there will always be Up’s drinking game.

I believe no one can ever forget Pei Wen’s reply to the how-are-you? question:

Due to the previous night’s post-drinking session as well as the fact that I was sneezing (almost) non-stop, I skipped this round

Lacking sleep since Wednesday, I could not stay up with the girls for a chat-and-gossip session. So I kind of nodded off around 4 in the morning as I wanted to go for training the next day. But I woke up with such a lousy leaky nose that I decided that I needed the rest more than the training session.

Sunday was a lousy day. Period.

I had a mock interview for a module on Monday so I had to borrow Jolene’s shirt since we were about the same size. When she found out I was going to wear a skirt (technically, there were shorts beneathe the skirt) she got so excited and demanded to see me in my formal attire :roll: I obliged her and here’s the picture Sue helped us take: 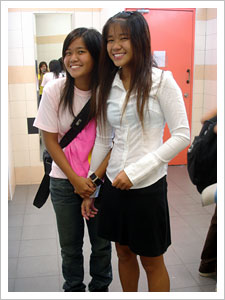 My interview went well. I guess it’s because I knew my lecturer and she is a rather timid person

After class, I met Jun Wei to watch Night at the Museum. Although it’s funny, it’s a pretty touching movie. I can even say if it was any less funny, I could just bawl in the theatre :?

—
Thank you for being there when I needed someone.