Part I – The Eve
Polo training on the eve of the Lunar New Year was quite a killer considering the fact that my whole body was still aching from Thursday’s circuit training. I doubt Jolene or Lilin would want to go for the coming Thursday’s cicuit training :?

After training, I just chilled with some of the team since we did not feel like going home just yet. Had some of Hotel Rendezvous‘ pastry and it’s quite good I then made my way to my maternal grandmother’s place for a steamboat reunion dinner

Amazingly, this year we were the second family to arrive because usually by the time we get there, most of them would have been done with dinner already. If you’re wondering, my relatives on my mom’s side do not eat together on a dining table because my mom has like, 12 siblings and even though not everyone turns up on the eve of the Lunar New Year, let’s just say the table can only hold less than the number of bodies present.

After dinner, most of us settled in front of the TV to watch some really badly subbed variety food show. No one changed the channel because apparently, everyone thought the other wanted to watch this dumb show. It was not until my sister asked my uncle and cousins if it was fine to switch channels then did we all find out that everyone wanted the channels switched!

Turns out the satellite at my grandma’s place is so bad that we only had three miserable channels there :mrgreen: So we ended up playing Pick Up Sticks. Very lame, you may say. But it’s much more entertaining than the One-Eyed-Monster. I would show some pictures if only my cousin sends them to me.

Part II – The First Day
My family went to church in the morning before heading to my paternal grandma’s place for visiting. When we reached there, most of my relatives had arrived. This year, it felt really weird because my younger cousins (in kindergarten) were watching Nickelodeon, Natalie and Petrina upgraded from Dai Dee to Mah Jong (read about Natalie’s Dai Dee addiction here and here) and were playing with Gu Ma and my sisters, the adults were having their own private conversations and my grandmother was cooking in the kitchen, leaving me and Anders with, well, nothing much to do, really.

Oh, we tried helping my grandmother with the cooking for lunch but she shoo-ed us out of the kitchen :?

After lunch, my relatives left and my parents went home to rest. Anders had brought my DVD player and started watching Nicole‘s ??? (My Girl) discs. So I played Mah Jong with Gu Ma, Nicole and Judaxil.

And it turns out that I have a nut allergy! While playing, I snacked on the goodies there and I ate quite a portion of this cashew nut cookies and my right eye started to turn sore. Initially, I thought it was an eye lash in my eye or that my fringe was irritating my eye. But when I checked the mirror, I found out my eye had swelled a tad. Gah! I don’t get it. I’m developing allergies as I grow older :neutral:

Anyway, I won four games! Haha. It’s not a lot, really, considering we played for almost three hours. But my sisters were so slow in throwing their tiles :mrgreen: 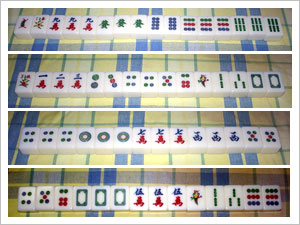 Anyway, I was going through my grandmother’s bedroom and look at the photoframes: 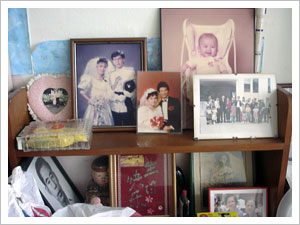 See that big baby picture on the top right? That’s me! Apparently being the first grandchild on my dad’s side have this benefit

Around dinnertime, my parents came back to pick us up to head to the other grandmother’s place. We arrived to find no dinner there (since my parents failed to inform my grandmother that we were coming for dinner). So while my parents went out to get dinner, my siblings and I settled ourselves to a rather fuzzy-looking (due to the bad satellite) Harry Potter and the Chambers of Secrets. (Anders wanted to continue with ??? but Nicole and I outvoted him.)

Part II – The Second Day
Due to the exhaustion from training and visiting, I slept till lunchtime. At around three in the afternoon, my family left for my Xiao Yi‘s place. We were the last family to arrive this time. Everyone had either had their fill or we taking their third or fourth helpings. Believe me, I would have taken more than that if there was enough food to go around. Uncle Joseph, Xiao Yi‘s husband is a chef and owns a Spanish restaurant. His cooking is a kill for

It seems like there’s a new generation of Mah Jong players. No longer are the aunties and uncles gambling on the tables but it’s the kids instead. 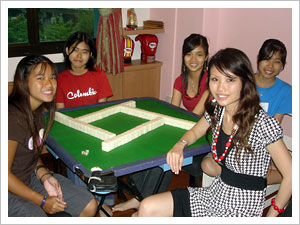 Me, Nicole, Abby, Judaxil and Jolene

The first three rounds were played with my aunties and uncle helping us. Finally, after being “frustrated” at our lousy gameplay, they threw in coins as an incentive not to “anyhow throw our tiles”.

Winnings are awarded as below:

Because the expert Aunty Mary kept helping her daughter Abby and Judaxil, they kept winning round after round. I only managed to win SG$2.60 Ah, well, at least I’ve learnt quite a lot from Si Jiu Mu