After seeing the last of Elisia from the viewing gallery, Perrine, James and I sat down at Coffee Bean and started talking. Well, Per fell asleep while James and I chatted After an hour or so, she left for home while he was being ARNG and accompanied me to some place to “poke more needles into my finger/hand”. (I needed a translator and darling Jennifer was too tired to get out of bed.)

Man, I don’t know which to be more stunned at: the fact that blood splurted when The Man poked or when no blood came out at all.

No, that was not acupuncture. It was some method of poking needles to let the blood flow out or something since it was a blood clot and the blood is not flowing (or something like that). The Man (I don’t really know whether to label him as a doctor or physician so let’s stick to “The Man”) probably poked me more than 25 times around my hand and finger and squeezed quite an amount of blood from those holes :?

After the 20th hole or so, he turned to James and asked him (in Chinese), “Doesn’t she feel pain?” Well, I was pretty calm throughout the whole process while James did the cringing and wincing for me. And, well, I guess I could tolerate the pain. Felt pretty nice actually

But my left hand felt pretty sore after the whole treatment. Not to mention the large bruises on the back of my palm and my wrist. 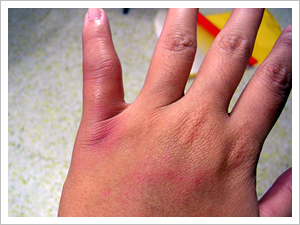 The greyish patch at the back of the palm is actually a large bruise. 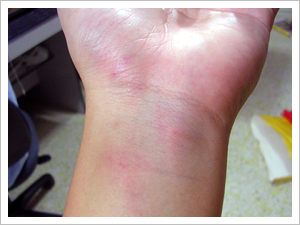 Another large bruise at the wrist. 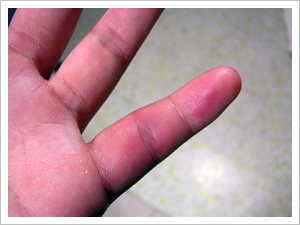