So they end up giving me gifts I do not exactly want but end up keeping them anyway because I was touched that they remembered my day and gave me something to remember it by, too.

Well, so what do I want this year?

Well, isn’t it better to give me money so that I can spend on whatever I want?

(Note: list is not arranged in any particular order.) 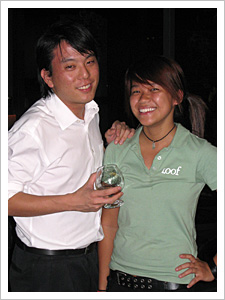 I was working on Sunday night when Charlene texted, asking me to head over to Mervin’s birthday chalet after my shift. I was hestitant to join since I did not know Mervin that well (besides that one drinking session with a few others) so I asked if I was invited.

She replied with his text invitation (which he massed texted to those he invited) and I replied, asking in a joking manner I was invited by him or she had forced him to Well, I went down to the chalet anyway.

I arrived just as Mervin was about to put out the BBQ pit. He cooked me some really tasty meat as well as a couple of hot dogs as Charlene introduced me to the small group that was hanging around, drinking and gambling. There was his wife, JD and his girlfriend, Morris, other ex-NAB staff and their girlfriends…

After clearing up, Mervin, Charlene, Morris and I sat down and started playing card games. Loser drinks the cup of beer. We could go a round and either pour more beer into the cup or pour out the beer. Morris kept getting the smallest card and kept putting off drinking the beer until there were four cups in front of him. I think out of the 13 rounds we played, he lost like, nine rounds? And we all helped him with his beer :mrgreen: But apparently it was still too much for him and he puked later on :?

Even though it was not a big thing, it felt nice and I enjoyed myself

My internship started last week and it’s boring. Well, and somewhat demanding. This is a reason why I will never get a full-time job at the office.

Since last week, I have been pulling a five-day-six-night week. I am somewhat amazed that I can just sleep for about three hours a day, pull a nine-hour long office job, then a seven-hour shift at the bar. I guess I can now claim the title Charles gave me a few months ago: Superwoman

It was pretty much a lousy day yesterday with oversleeping, getting to internship an hour late, getting crap from the higher up folks, being demanded to do stuff that gets rejected 7863458976 times, re-doing those stuff 7863458977 times, listening to someone tell me something that I have been suppressing for months so now it becomes a reality, missing training because of internship, getting to work late because of internship…

That is why I wanted to go drinking. So, after work at half past three this morning, some colleagues and I ended up at a bar drinking beer and Chivas and watching the Chelsea-Liverpool match. I am not much of a soccer fan but I supported Liverpool this morning. In fact, everyone else was supporting them. But darn Chelsea! If that penalty was not scored, it could have been a draw.

Charlene was the only one rejoicing and making a whole lot of noise, irritating the shit out of everyone else (She is only supporting them because Liverpool kicked her team, Arsenal, out.)

I enjoyed myself tremendously. It made me forget (more or less) about my lousy day. And it made me look forward to working tonight