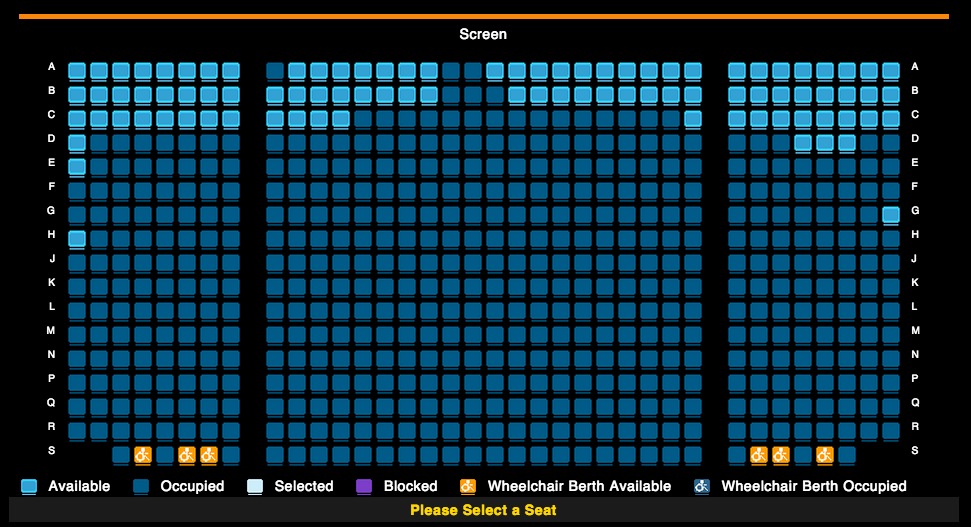 Seating plan for The Hobbit trilogy in 3D

I sent the above to my BFF Rey saying, “What’s left of The Hobbit trilogy, and here I am, thinking we get the wheelchair berth and bring our own chairs ”

I mentioned it to Guan and he was like, “Just go with wheelchairs.”

So, anyway, I had forgotten to buy a loaf of bread earlier while getting dinner and went to the mart to grab one. While walking on the way back home (it was about 8.30 p.m.), I saw several old folks sitting on the benches downstairs, and I thought about how I miss sitting down at void decks, talking and chilling with Perr into the wee hours of the night, maybe drinking, maybe listening to house or trance. And I thought that the next chance would probably when I’m old like these folks, with not much parental responsibilities, but I wouldn’t be sitting till the wee hours and I wouldn’t be with Perr (unless she’s miraculously my neighbour. Ha!)

And while I was thinking about Perr, I thought about this video that I shared on her Facebook. It’s so hilarious that I was chuckling to myself every now and then, gathering weird stares from people who passed me.

Okay, after writing that down it didn’t seem long any more 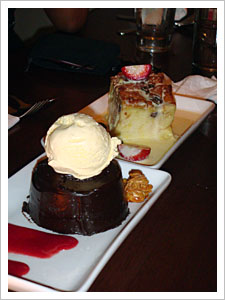 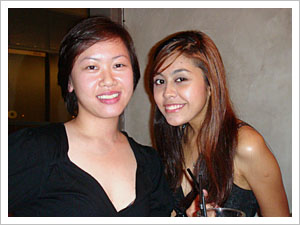 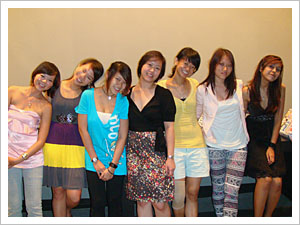 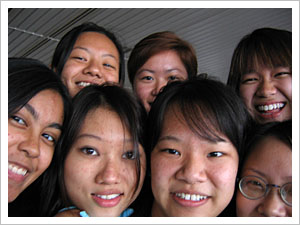 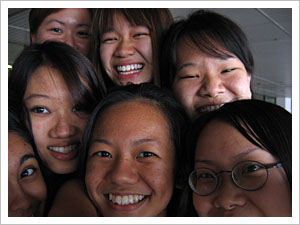 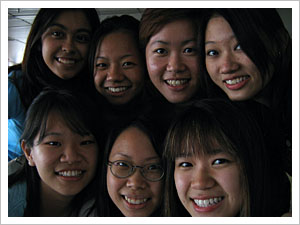 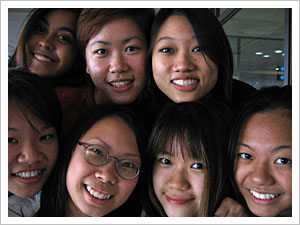 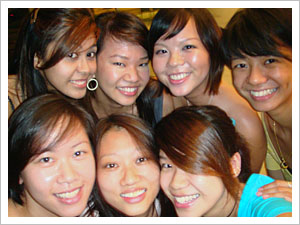 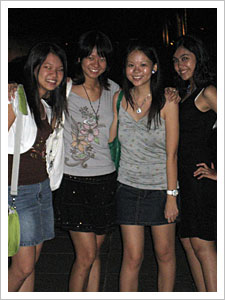 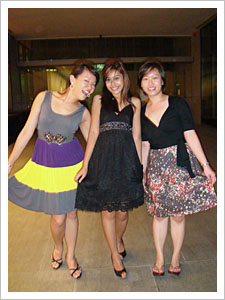 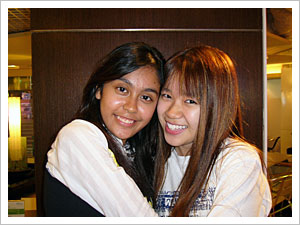 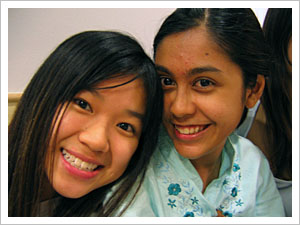 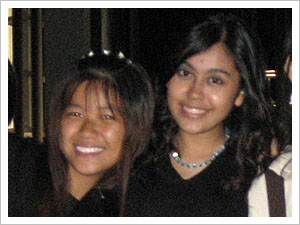 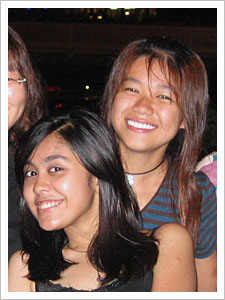 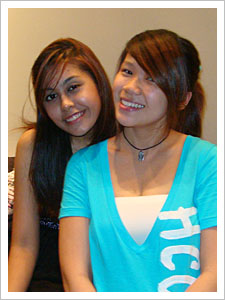 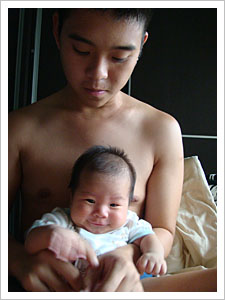 Firstly, Happy 24th Birthday Pei Wen! I’m sure you had awesome gifts. If not, wait till Saturday for your awesome gift and celebration!

Sunday was a pretty awesome day because friends and relatives finally got to meet Zayden Asher!

He was a sociable baby, not crying while he was being passed from a pair of arms to another. He wasn’t the only baby there though. I finally got to meet Cheyenne! Though she was exactly a month older than Zayden, the difference in their sizes was quite big. Plus, she has these huge pretty eyes. They were bigger than bambi-eyes

As I was busy running between groups of friends and relatives, I did not manage to take much photos

Everyone said Zayden was really cute. Guan and I couldn’t agree any less Since it was a special occasion, he was wearing his new Threadless onesie, (I love this design but my size ran out of stock.) and Guan and I wore our Missing!!! tee. 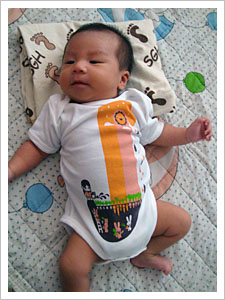 The Very Important Baby (in his new clothes!) 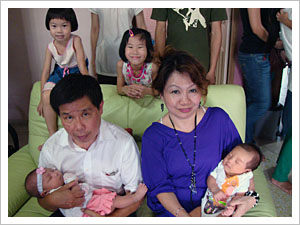 My 2nd uncle carrying his granddaughter Cheyenne and my 3rd uncle’s wife carrying Zayden. At the back, cousins Esther and Abigail.

Ooh, yes! My mother bought cakes! She wasn’t in time to order a huge cake for everyone and, instead, bought three small cakes 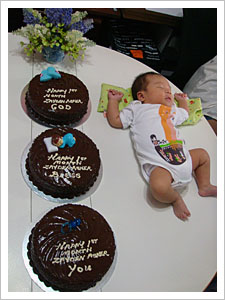 The kid and his cakes. 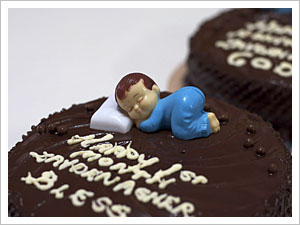 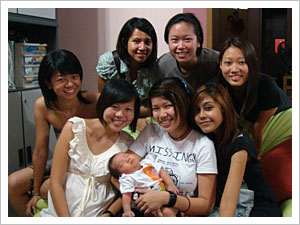 7ners with the first 7ners baby 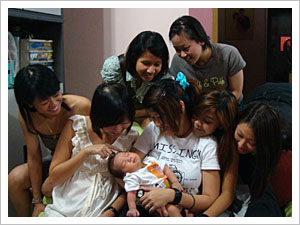 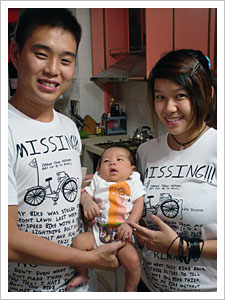 After every guest had left, everyone was quite tired. I mean, my siblings KO-ed in the living room: 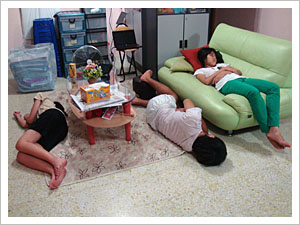 Ending this post with an awesome photo (courtesy of Pauleon): 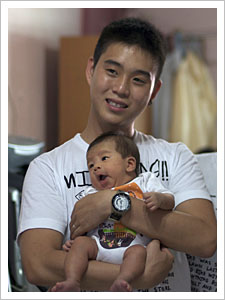 Let me just say that no, I’m not excited and, no, I’m not nervous. I’m just very, very sleepy!

Last week the 7ners threw a hen night for me. It wasn’t anything riotous but we had fun dinnering at a pasta/pizza place and then a girls’ night at a hotel. They presented me with… cupcakes with a pair of boobs on them :? Along with two lingerie sets from Pierre Cardin. Well, thank you very much! As girly as it was

It was Lynn’s wedding last Sunday and I must say: Congrats Lynn! I’m happy for you

Anyway, I didn’t do much on the eve besides collecting the gowns and flowers. In fact, I had to settle quite a number of last minute stuff. I also did my nails :? Something that I really don’t enjoy. My french manicure is destroyed but it’s not that obvious from afar. NO MORE MANICURES FOR ME!

I should really turn in. The beautician would be here in less than three hours!