So it was Jo’s 24th birthday and we celebrated at Spageddies. This year for her, we didn’t get a cake so we could invest more on the present

The food was disappointing and it would probably be the last time I ever dine there. Then again, the first and last time I dined there before Friday was almost a good five years ago. A lot has changed.

Saturday was spent lazing around and watching the first season of Prison Break again.

On Sunday, Guan and I went to Funan DigitaLife Mall to get my DVD fixed. Apparently there’s something on my discs but I have no idea what :? And when we asked around, apparently, no one in the IT mall knew what the hell was wrong with my precious DVD

After that, he spotted this 1TB harddrive that came with a free speaker that he wanted some time ago (the speaker, that is. The harddrive was something he wanted a couple of weeks ago after his iMac was running out of space). And since I just received some money thanks to the government, we splurged on it at one go. So now I’m a poor girl :?

Anyway, we were at the bookstore and I saw awesome cookbooks so for the past couple of days, I have been going through food and baking blogs and now I just feel like hitting the kitchen and making a mess in it. The problem is that I don’t have an oven. The microwave died like a few months back

And I gave up finding an admin job. Decided to go with the boring bar job. There has been some issues but I guess I’m just making waves wherever I go. I can never get along with the management. Seriously

So after scoring through the classifieds daily over the last two weeks, trying to find a decent admin/data entry job, I have failed rather miserably.

And aside from doing the above mentioned, I have been slacking around at home, re-watching awesome HIMYM episodes along with my Legend of the Condor Heroes DVDs and, well, sleeping.

I don’t like not having anything to do because it makes me rather lazy.

Not to mention that even though I have thought about changing my layout (it’s been up for like, more than a year. Or is it two years now?) I just can’t get my creative juices together to come up with a neat and awesome layout like this current one. (I should mention that Alexis Bledel is still really pretty.)

Anyway, I have finally upgraded to WordPress 2.7.1 and I’m still trying to get used to the new interface :?

Rey‘s finally in Australia and I will really miss him. No more 3-am-Carl’s-Junior-burgers for me, I guess. Or awesome talk and HIMYM references

Anyway, Xavier introduced me to a bar job and I’m hoping to start next week and switch to full-time next month. So, no more hoping-for-an-admin-job for me. It’s back to the bar!

As a final note, Tarmidzie told me that the Coldplay concert tickets have all been sold out All I can say is: SO FAST?!

We spent the first part talking about HIMYM and after locating to a bench at the beach, we talked about the old school cartoons of the 80’s and 90’s (Duck Tales, Tale Spin, Duckwing Duck, Beetlejuice, Captain Planet, anyone recall?) then to eurotrash like Floorfilla’s Anthems #2 to #6 (my personal favourite is #5).

I cannot believe how much I can laugh whenever I’m with him. It’s either he cracks me up or vice versa. Every chilling session always ends up with the aftermath of multiple laughing sessions.

And to top the night off (well, wee hours, since we left East Coast Park around four in the morning), he was overtaken by some car (I’m never good with car brands and models) while we were deep in some conversation. Totally stunned, he stepped on the accelerator and just zoomed ahead, crossing to the opposite lane to overtake that car (since it was a two lane road). He probably hit 80km/h, I don’t know, but all I know was that suddenly, we both noticed the hump ahead and he still had time to go, “Oh shit!” before pressing the brakes and allowing the car to actually sail over the hump without scrapping anything.

On a side note, I’m still looking for a temporary admin job. Job hunting is so not easy when it’s not F&B related :?

I had the best time on Friday because I was listening to Chicane perform live at Chivas Live @ RVP. I was with Sham and Joe at the VIP/VVIP bar and we were just having fun 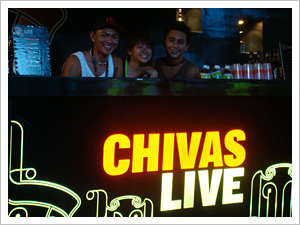 Sham, Me and Joe 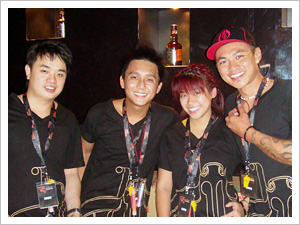 So it was The Happy People Company’s 3rd birthday party on Monday at Dempsey Ben & Jerry’s and my batch of scoopies decided to meet up and head to the bash together.

It was a rather huge event. The moment we, the newbie scoopies, settled down at a relegated corner, we started taking a lot of pictures 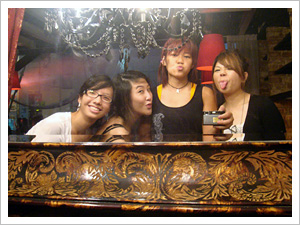 It was Hans‘ birthday on Wednesday and after work, I was asked to head to Zouk to celebrate. The thing is that it was Mambo Night. And I hate mambo nights. But, it was Hans. So Charlene, Vincent and I ended up heading there.

There were a few polished 42 Below bottles by the time we arrived. So we shared a bottle of Moët & Chandon for the birthday guy.

Even though Charlene said she hated mambo nights, too, she somehow could totally fit into the dance crowd with all her dancing actions. And I will hate her for dragging me up to the platform where I had to move my stiff body awkwardly to the disco tunes. 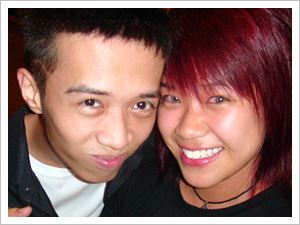 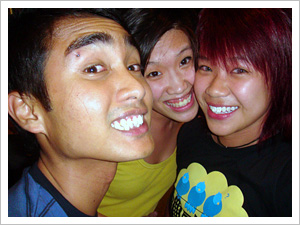 Can’t remember who, Charlene and I 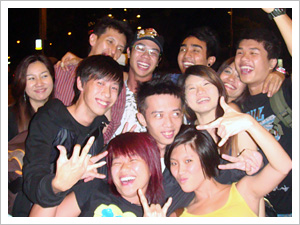 It was like some drinking Sunday or something. As Charlene and Charlotte’s folks were out of town, they decided to host a house party. So after work on Saturday, (or early Sunday morning considering we got off at about three in the morning) we made our various ways to their place with mixers and ice (food, snacks and alcohol were provided).

When we arrived, Johnson (the part-time chef) was there and, yes, he was frying the finger food in the kitchen. And I, being the bartender, was asked by Charlene to make a massive mojito with this fruit punch bowl. It was a trial and error thing but it turned out to be pretty good. Bacardi and Absolut didn’t interest me but the wine did

We made a hell of a ruckus playing house and trance tracks off Santos’ iPod, playing group games, daring each other, drinking, smoking and just talking the roof off and the condo-management had to rap on the door three times :?

Around seven, everyone was pretty worn out and started leaving a couple of hours later. Edmond was pretty tickled by the fact that Saufi was pretty tipsy. As we walked out to the road to get a cab, the latter was singing “7 Days” by Craig David, saying the most random things (like how rare it was to smell the early morning air) and waving and saluting at every single vehicle that drove past us

As everyone made their way home, I made my way to RSAF Open House 2008. I know, everyone said it would be boring but I just wanted to go for the heck of it. Ha! Still, after all, I did want to get a license once

After that, I had to meet Weili since he wanted to surprise my colleagues at work by popping by (and trying to get free alcohol and beer. HAHA!) And since I was there a couple of hours before my shift started, my AM actually offered me beer!

It was a nice quiet Sunday with customers popping by every now and then. But, man, I was really tired since I was drinking and had no sleep at all :?

* Shack (from TalkingCock.com):
To be extremely tired. Not to be confused with “shag” (the British colloquialism for having sex) even though it’s often misspelled that way in Singapore.