Jack, my man, thanks

Happy Valentine 2 ya. Hope got prince charming 2 celebrate with u. If u cant even find a frog to accompany ya, always remember still got me. Lol.

Thank you Jia Hui but thank the heavens that I need not the company of any frogs.

Ah, Alvin didi, thank you. But my dear boy, you failed to explain what tian tian mi mi means. I know it’s somewhere along the lines of “sweet” or something.

I have not heard from you from some time either Louis god brother. Nevertheless, thank you for your nice message.

This year, it seems like everyone wants me to turn 20 earlier.

I’ve got Khong Hwee Ah Beng calling me two days ago while I was in class and here’s what happened:

The next day, slightly after midnight, Siao Jia texted me wishing a happy birthday. She remembered that my birthday’s six days after her. Somehow, something possessed her to think that she was born on the 1st. Thus, making her think that my day’s on the 7th. When I told people that, they all went :mrgreen:

As I reached home yesterday, I was feeling rather down due to a runny nose and the thought of going to school today. This is the first birthday that I have school. It’s a really odd feeling, I tell you.

I guess the mild depression was chased away by two lovely letters I received. One was from Pensie which contained a cellphone-chain (something like a key-chain but it’s for the celly) and a handmade card. The other was a birthday card from Hong Chon.

I should tell you what happened last year. Hong Chon actually got me a card but (according to him) due to fate, he could not pass it to me. Instead, he sent me an MMS and I did not know all these till I read his blog last month.

I went down to SP for the prep camp for Nero’s Dream last night and enjoyed myself watching them play among themselves at the station games.

Here’s (another kind of) Twister: 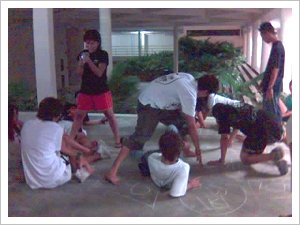 All the weird positions. 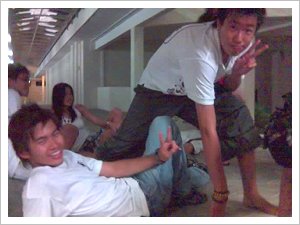 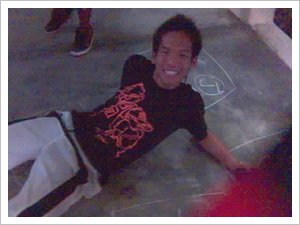 A rather slack Terence didi.

I went bowling last night. Only to find out that all 24 lanes were full and we were third on waiting list. So to kill time, we played pool. Just two games only because it costs two bucks per game.

The last time we pooled, it was more than six months ago at orchard. But I still managed to win both games

Anyhow, we got a lane and… I realised how terrible my bowling is.

I did not even get a strike! To think that all my training back in year one was wasted. I couldn’t believe that the two games I bowled were my worst scores ever. 40 to 60 range.

You wanna guess something? Yes! My friend bowled much better than me! And this friend claims to hate bowling and has only bowled four times before.

As my friend says, “The gods of bowling must be smiling at me.” I wonder what I did to offend those gods to frown upon me :neutral:

Okay, not that they’re really freaks, but you catch my drift.

It’s almost evening and it’s rather hard for my rather tired mind to accept the fact that it’s almost dinner-time when I just got up about two hours ago.

It was the usual japanese vcd watching marathon last night—or rather, early this morning. And I was surrounded by the Jap Freaks—Perrine, Elisia and Elisia’s older sister Evelyn. What I mean by ‘Japanese Freaks’ is that they’re crazy for anything Japanese.

So instead of watching movies like Mean Girls or Saved! or those usual chick flicks, we were watching Last Quarter (some japanese ghost movie) and Moon Child (some japanese vampire movie).

You’re probably thinking what brave girls we are—no guys, four girls, middle of the night, ghost and vampire movies. However, they are so not. Scary, I mean. It’s creepy but it’s not scream-able material.

I dozed off halfway when they were watching the behind-the-scenes for Last Quarter and I was half drooping during Moon Child but after the latter, it was about 9 in the morning and I felt rather energetic.

But I needed the energy for tonight as it is Elisia’s birthday dinner, so I lay down and in four minutes, I was in dreamland.

Hmm, I need to find out the kid who plays the small Sho in Moon Child.